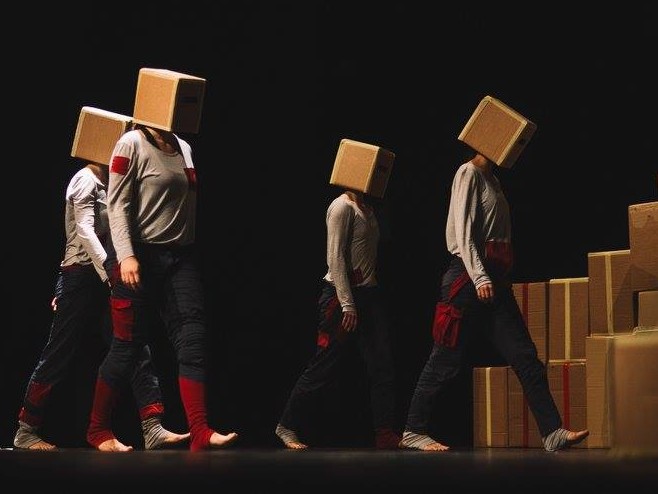 The play “Boxed” is not easy to fit into a simple theatrical framework, even though it happens in theater is inextricably linked with the circus. It is a dance-circus-theater piece. With the help of the elements of contemporary dance and new circus is represented by four ordinary working day warehouse women, surrounded by all sorts of packaging, packages and boxes looking for a place for yourself and your dreams, desires and hopes.
What is the shelf life of your dreams, how much they have to stand before us permission to become a commercial machine comfortable everyday? The inevitable collision work and private life changing employee who, while hiding their own, someone else’s dreams are packed …
During the performance scenery comes alive and becomes a circus-acrobatic dance props, with the help of which overwhelmed and airspace scene. Exactly warehouse women facilitate their working hours spent in space, not in heaven or on earth or in ovoms regarding the cases not in a box is not outside of it.

The authors of the project are four circus artists from Cirkusfera, which are the inspiration found in the parallels between the first look “ordinary” jobs (administrative, physical workers …) and those at first sight quite “unusual” (art, showbusiness workers …). From logically impossible, the collision of these parallels was created a play with an unusual theatrical language celebrates the similarities of these different spending 8 hours.
The first step in the realization of this idea was definitely engaging choreographers of contemporary dance, which withdrew the merger circus and dance skills. Later, with the connection directed the play gets theatre character. Last, but certainly necessary and the arrival of two musicians linked all in a diverse whole.
The premiere was held on 19 February 2016, the SCCC, under the Open Theatre.
Authors of the project: Biljana Zlatanović, Hristina Šormaz, Sanja Radulović and Danko Sekulović
Choreography: Sanja Cvrkotić
Director: Ana Popovic
Muzičarke: Ljubica DAMĆEVIĆ and Katarina Rankovic
Production: Cirkusfera